Like most people, I’ve felt caged over the last 18 months or so: it feels like I’ve hardly left the house. If you feel the same way, I encourage you to look over the pictures you’ve taken over the last year. When I did this, I discovered that I’ve been out in the landscape pretty much every week. It was a good antidote to the misapprehension that I’ve not been out much.

These are my ten favourite landscape images from 2021.

Looking towards Hen Cloud at dusk

I spent most of January and February completing work on a panel of images for my associate submission to the RPS. One image I wanted was a shot of the Roaches under snow, but this is a hard shot to get because the Roaches is a popular destination with hikers and climbers. This means that the snow gets quickly churned up by footprints. So when I saw snow falling in early February, I headed out so that I could shoot while the snow was still pristine. On this evening I also got lucky with an interesting sunset. I collected the 15 images from my panel in a book and I decided to use this as the cover image.

Looking towards Hen Cloud at dusk 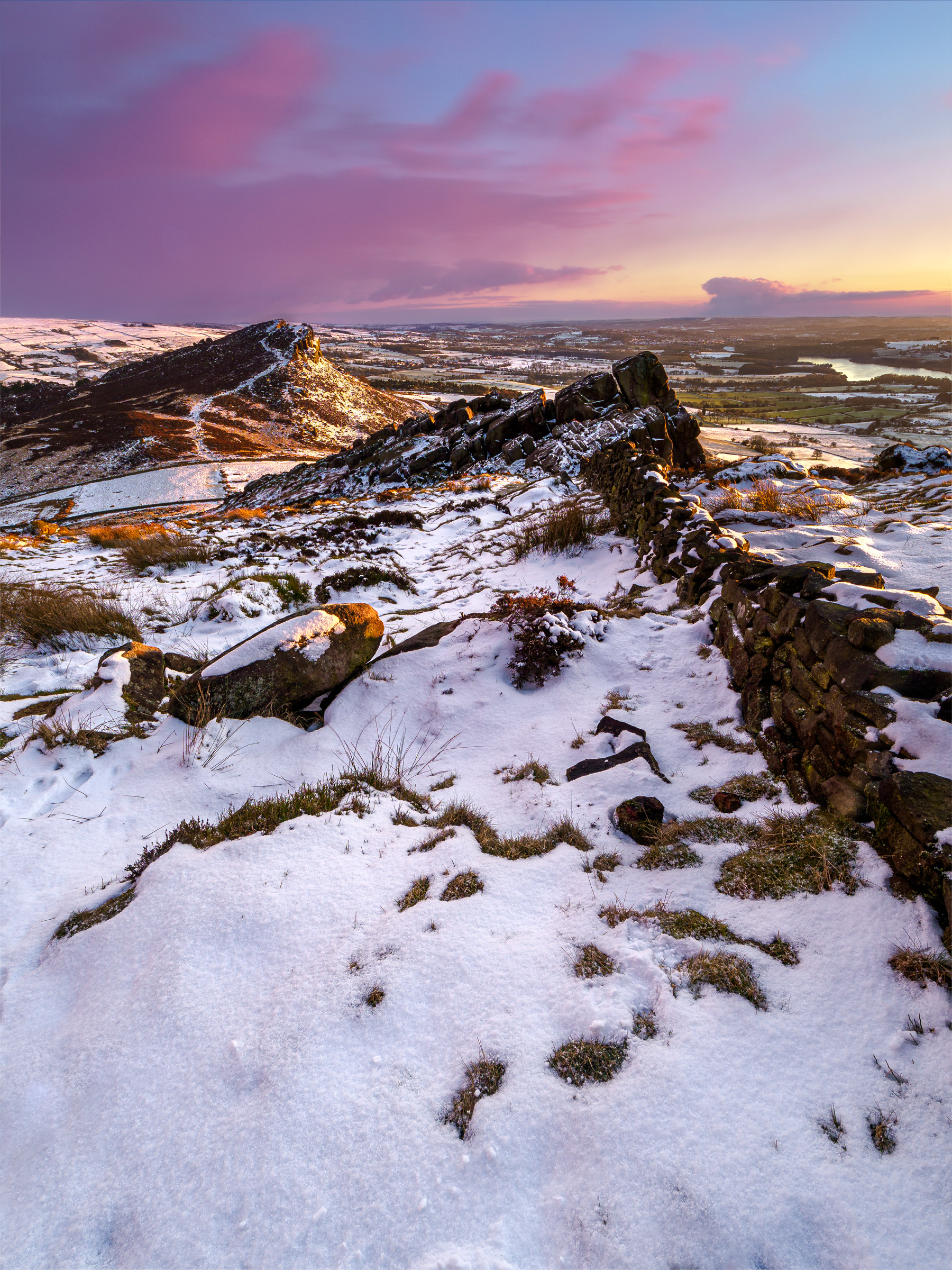 This was another image I took for my ARPS panel, taken at sunrise in late February. Ramshaw Rocks is a popular photography destination but I’ve not see anyone shoot this composition before. I liked the way the foreground rock points you towards the outcrop in the distance. Getting good light at Ramshaw Rocks is a rarity and I went several times in January and February before I got this gorgeous light on the rocks. 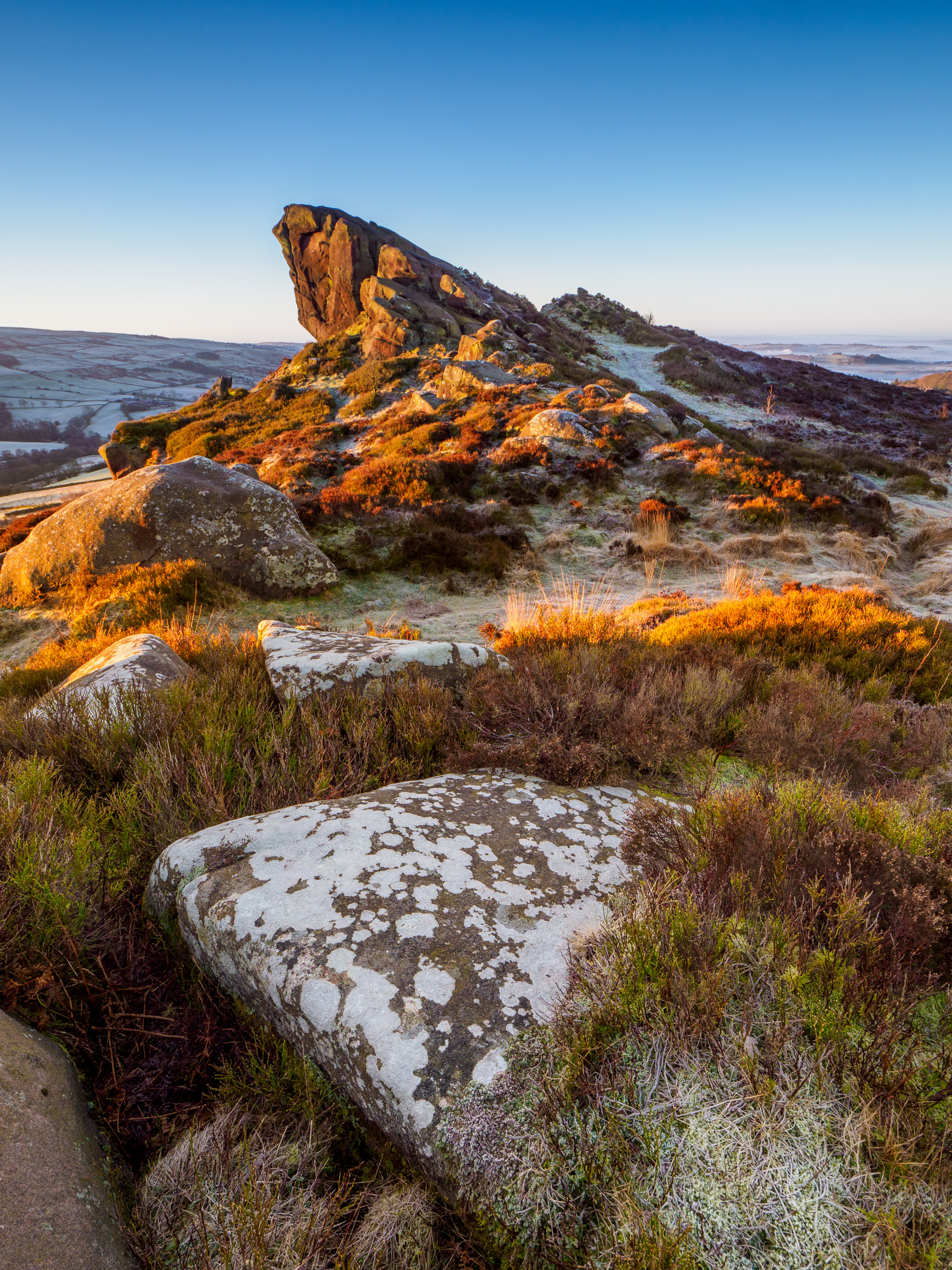 This is the most recent image in this collection, taken just before Christmas. For a while, I've wanted to photograph Rudyard Lake in the mist and the upside of December’s miserable weather was that we had some misty and foggy days. Visibility was just a few hundred yards and the lake was very still. Even though there wasn't much wind, the boats moved around quite a bit, changing orientation, so compositions came and went in a few seconds. 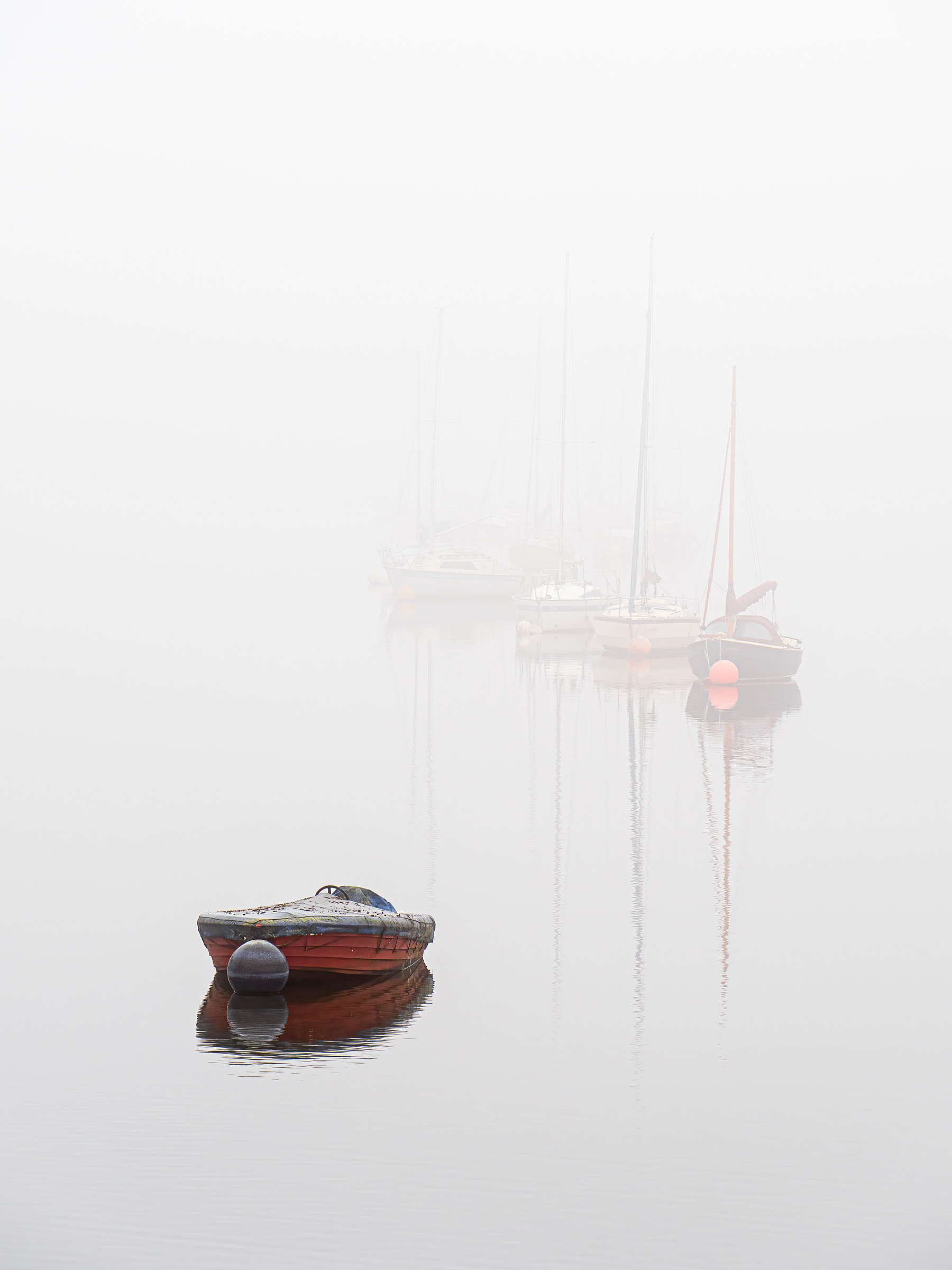 Autumn was a slow burn in 2021 and we didn’t get the amazing colours of previous years. But in November I headed to Bolehill Quarry to work on my woodland photography. It may seem an odd comparison, but I find woodland photography a bit like photographing a crowd of people. There’s so much going on that it’s difficult to isolate the one or two interesting subjects from the overall clutter. I felt this one worked because of the colour contrast that made the tree stand out from the foreground and background. I used a shallow depth of field to try to further isolate the tree. 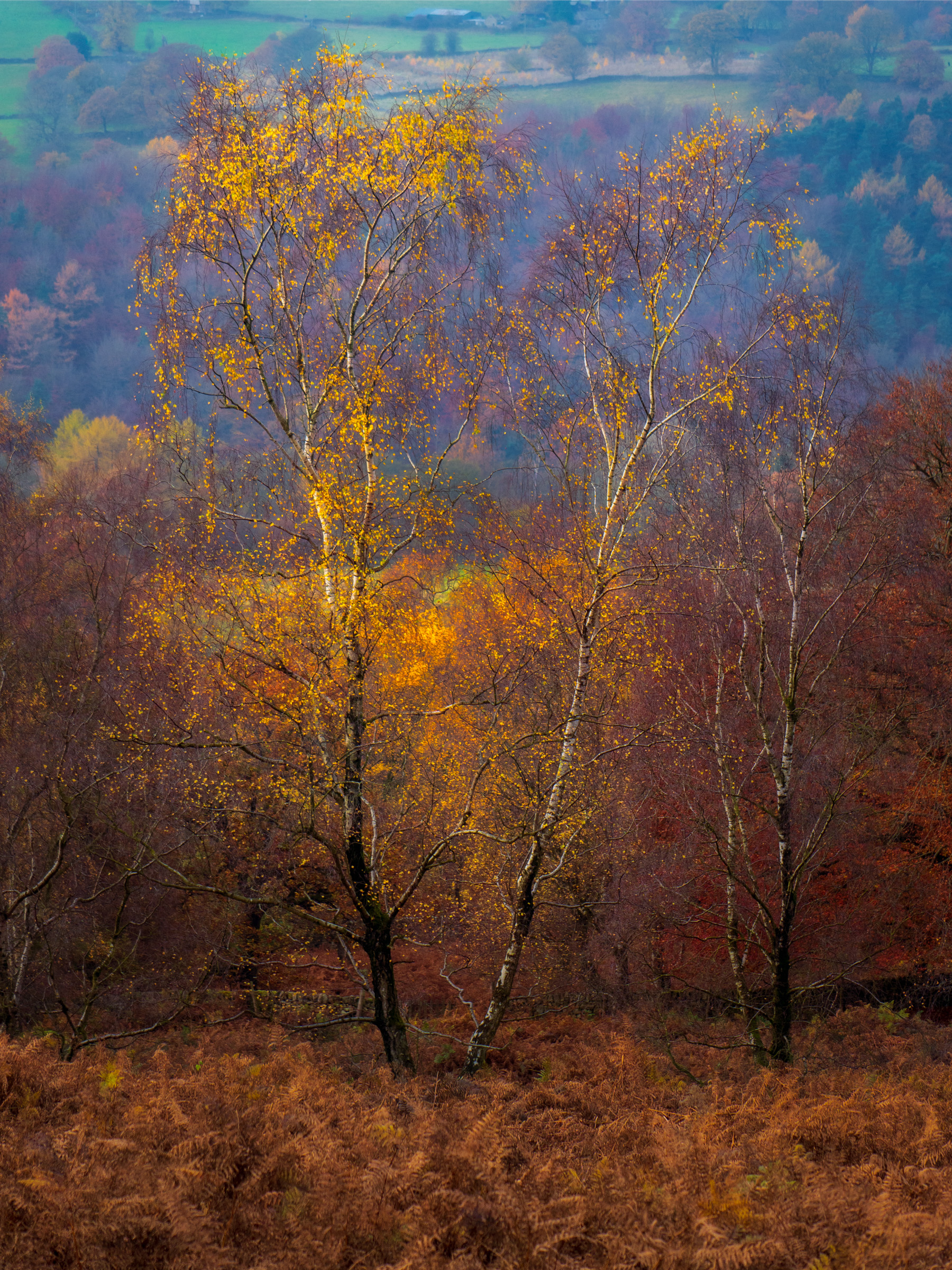 I headed to Gib Torr in August hoping for a shot of the heather at sunset. The heather was out in parts but it was clearly a week or so away from its peak. While looking for compositions that included the heather, I realised that the scene wasn't about the heather at all but about these grasses. It was windy and they were moving in the breeze. To capture the movement, I used a 6 stop ND filter but that made the leaves in the tree blurry, which I didn't want. So I took another image without the filter and then blended them together. So the top half of the image is a 1/25s exposure and the lower half is 1.6s. I also used a 2 stop soft graduated filter to darken the sky. I really liked the painterly effect that resulted from these choices. 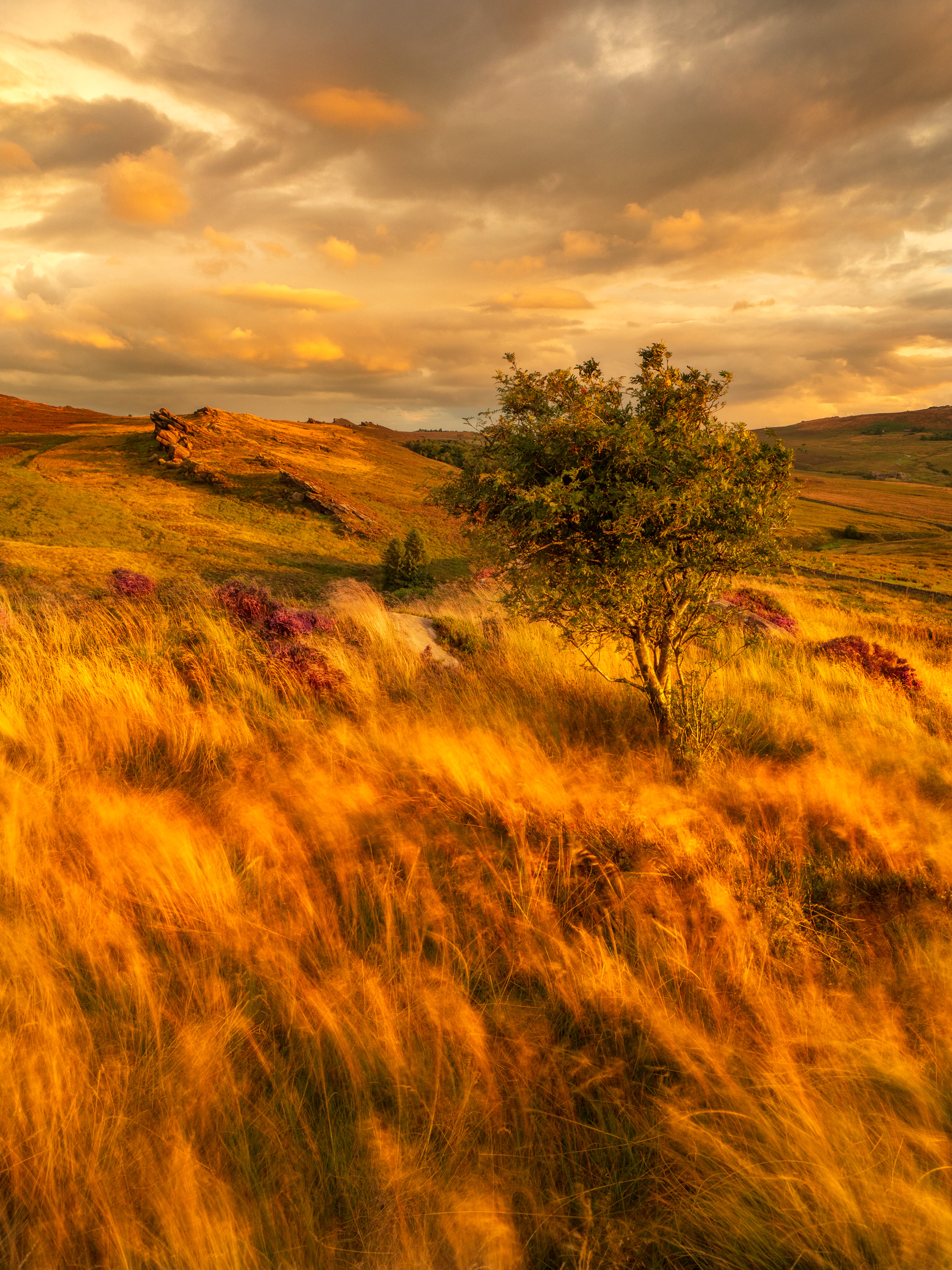 A few years back I would have described myself as a photographer that walks, rather than a walker who photographs. Walking used to be a necessity to get to the location, but it wasn’t something I found enjoyable in its own right. More recently that’s changed and I now enjoy a hike with or without my camera. I took this image from the top of Mam Tor on a 7-mile hike from Cave Dale, through Mam Tor and Back Tor. Taken at early afternoon in late Summer, you wouldn’t expect the light to be very interesting but the rapidly shifting clouds created some interesting shadows on the hills. 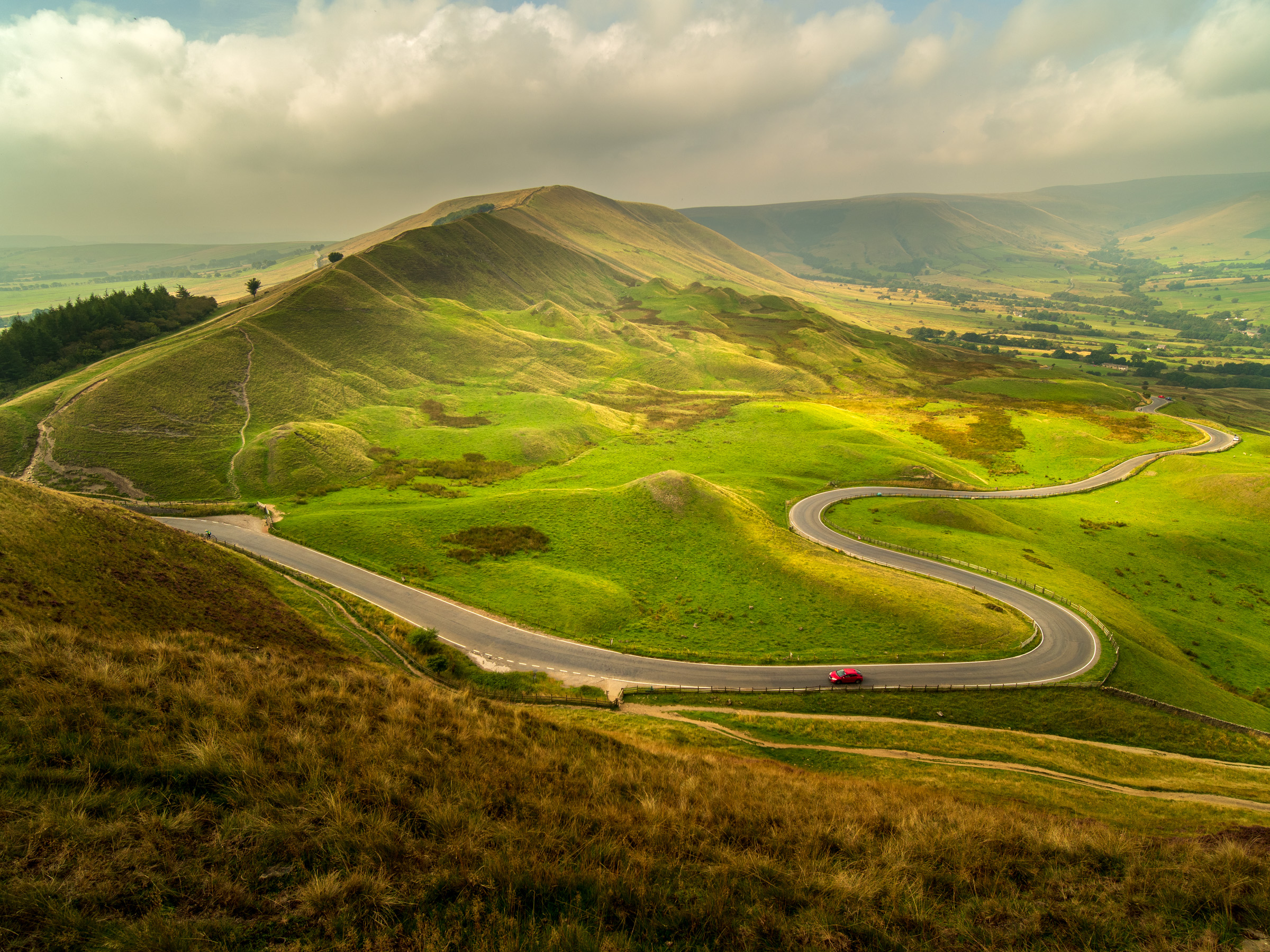 I took this image in early September at sunset. It’s a tree by the A53 Leek to Buxton road that I’ve driven past hundreds of times and admired from a distance. But I’d not photographed it in the past because there’s nowhere to park. As it looked like we would be getting some good evening light, I decided to park as close as I could and then walk back to the location. It may look idyllic, but it’s not an especially meditative location: I was shooting from a grass verge on a road where traffic whizzes past at 60mph. I guess that makes the point that all photographs are lies since you don’t see what’s just out of frame. 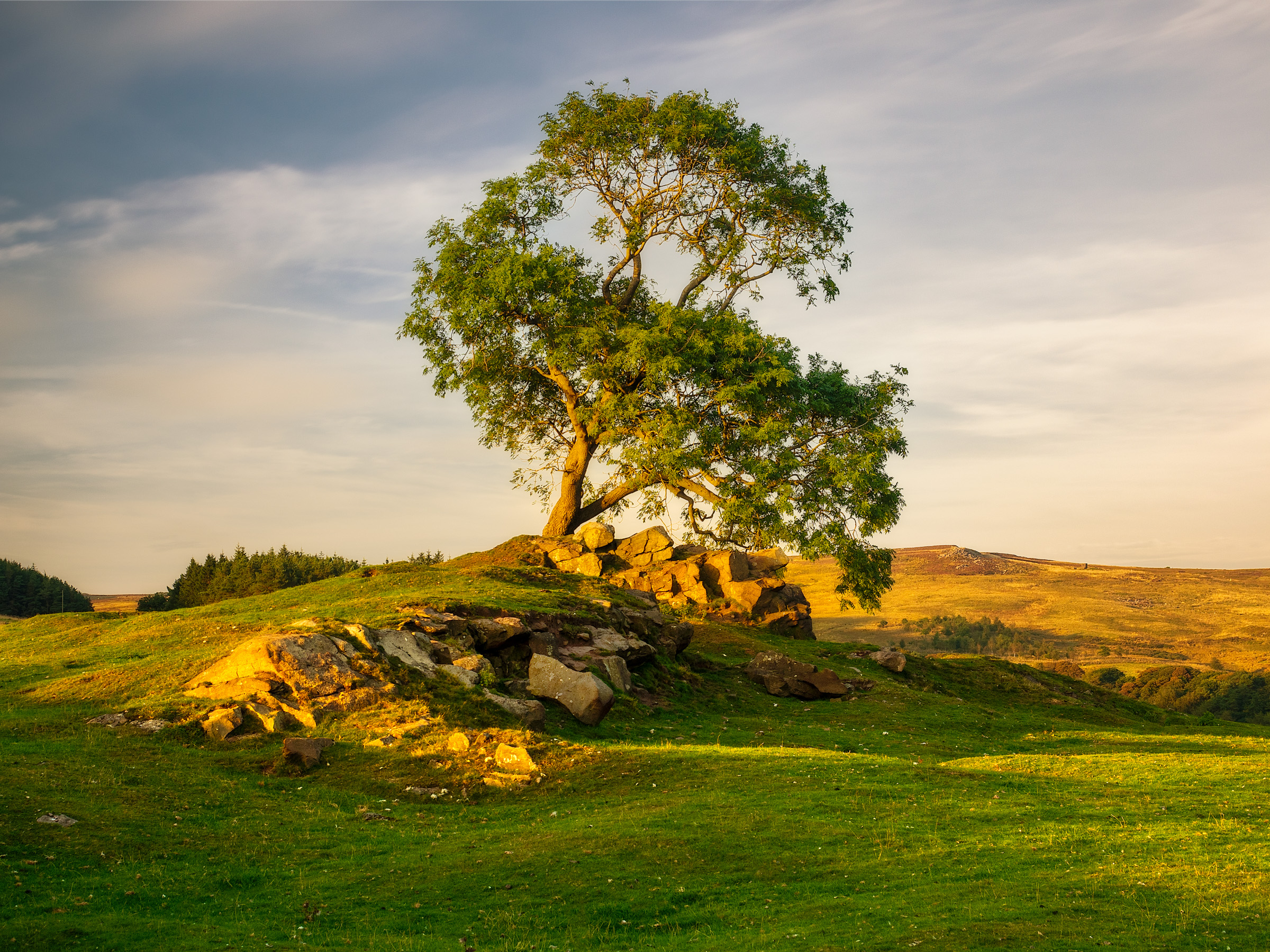 I attended a photography location workshop at Hilbre Island in October. The location was interesting but I couldn’t seem to make any images that went beyond mere representation. Frustrated, I left the workshop early, just before sunset, and headed back to the car ready for the 2hr drive home. A few minutes from the car park I spied this jetty so I set up my camera and filters and prepared for a long exposure. This was more like the kind of image I wanted and it just goes to show that the best images sometimes come when you stop looking too hard. This image was placed second in the RPS Landscape Group's monthly competition for November. 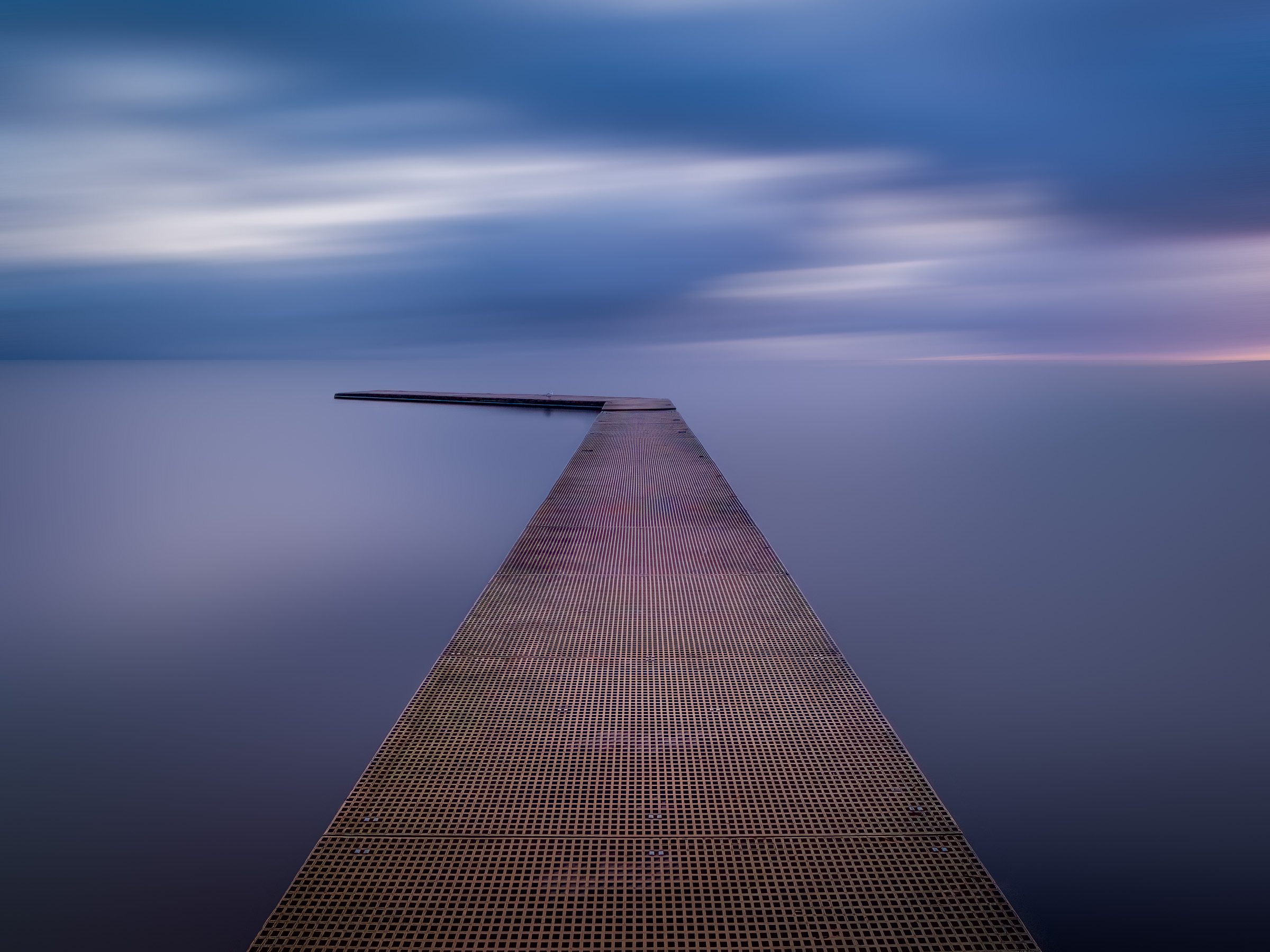 Zoom has enabled me to attend dozens of photography talks that I would otherwise have missed because of the pandemic. One of the best I attended was given by photographer Ashley Franklin to Rolls Royce Photographic Society. Ashley showed a few photographs from this location known as The Chevin near Belper. It’s about an hour from me so in November I decided to take a look. It’s an old Roman Road that skirts around a golf course. Most of the images I took weren’t very memorable but I liked the ‘tunnel’ effect in this shot. I didn’t have a tripod with me, which was a big mistake as it was very dark despite it being a bright day. I would normally avoid such a high ISO setting with my micro four-thirds camera but software de-noising has become so advanced that this image is clean and sharp. 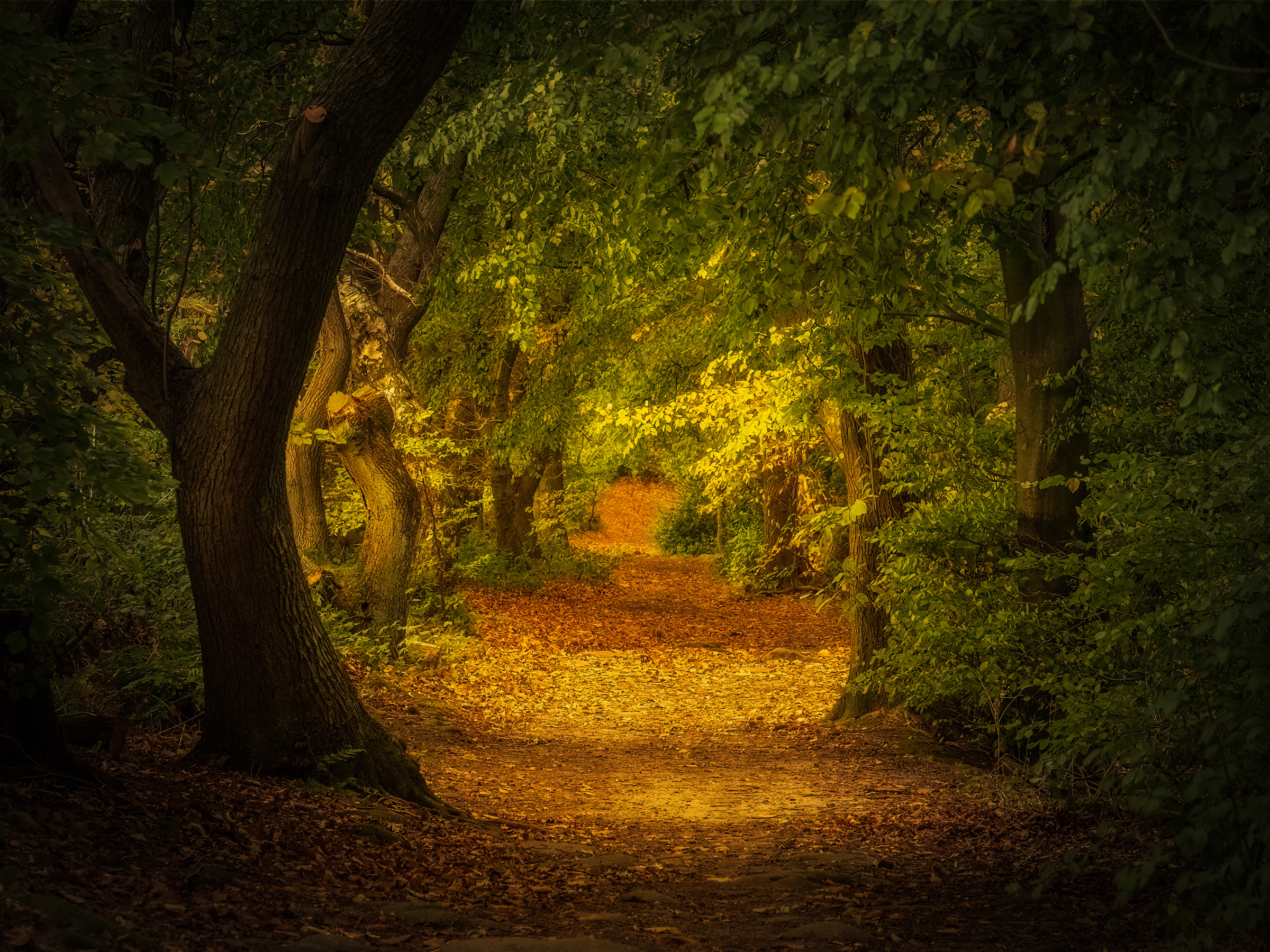 I visited this secret wood on and off through May and June, trying to get the timing right for the garlic. Prior to this visit, the garlic was out only in patches. On this visit, it was pretty much at its peak. I spotted the two fallen branches and thought they made an interesting lead in to the scene. In the original, there are some blue patches of sky intruding into the scene at the top. In this processed version I've cloned in some leaves. 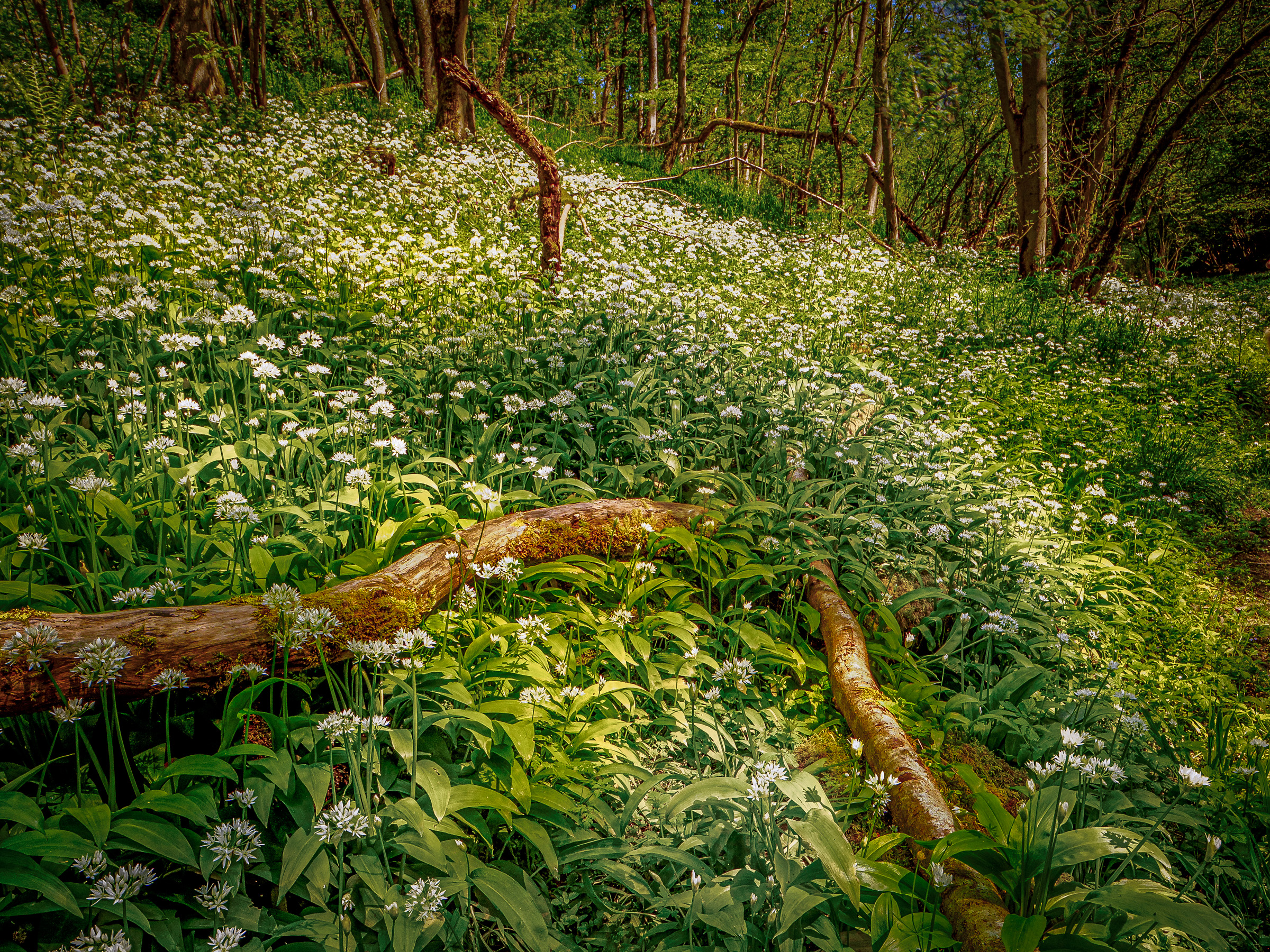 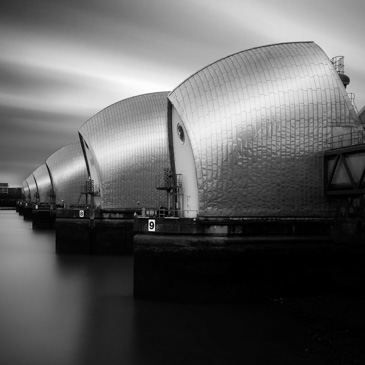 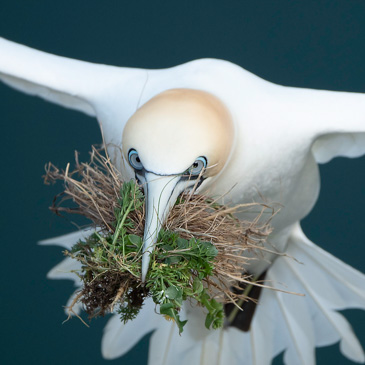 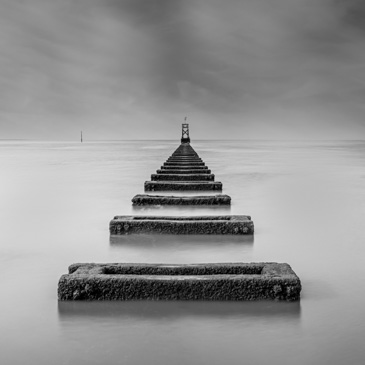